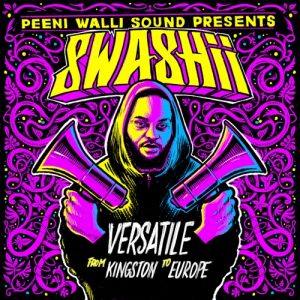 Long before Covid, long before quarantines, Peeni Walli Sound from Europe teamed up with
the upcoming Jamaican artist Swashii for this short and spicy mixtape full of dubplate specials.

Swashii was born in Kingston’s Kencot in 1994 and 13 years later got his first opportunity to visit a recording studio by the late great Sugar Minott. He started his career as a deejay already in 2008 and among his major influences are the 1980s legends Eek-A-Mouse and Lone Ranger, 1990s stars Sizzla and Shabba Ranks, as well as the 21 st century celebrities like Vybz Kartel and Popcaan.

Peeni Walli is an established juggling and clash sound coming originally from Prague (Czech
Republic) but currently based also in Germany, USA and Switzerland. Most recently, in April
2019, they won the Melting Pot Soundclash against Sensithief (Poland) and Ghetto Youths
(Slovakia) adding yet another trophy to their collection.

The 18-minute mixtape “Versatile: From Kingston to Europe” consists of nine dubplates
voiced specifically for this occasion. Not only does the mixtape showcase Swashii’s lyrical talent and musical versatility, but it is also a testament to the truly global nature of current reggae and dancehall music. The wealth of cultural influences meets authentic Kingston dancehall style!