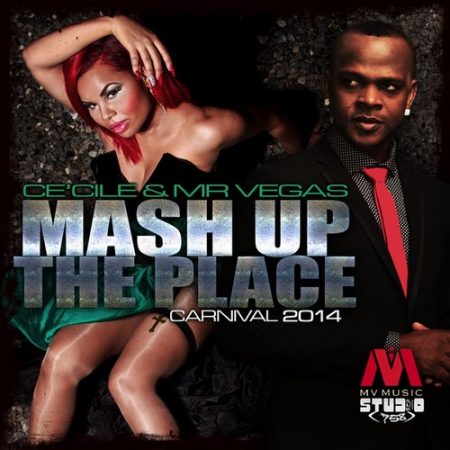 It’s soca season and Ce’Cile and Mr. Vegas, two of Jamaica’s most successful dancehall artistes have teamed up to release what is expected to be one of the hottest tracks this soca season, Mash Up the Place.

Mash Up the Place, was produced by Studio 758 out of St. Lucia and Mr. Vegas’ own MV Music and will be released this week, Mash Up the Place is a hi-tempo soca track which will definitely have you moving. It features the sexy vocals of dancehall superstar Ce’Cile and the gritty vibe of Mr. Vegas’ lyrics blended together to make a catchy dancehall/soca hybrid tune.

This is the first time both artistes have collaborated on a song, despite their many years of friendship, and according to Mr. Vegas: “We have always been on the road touring, when I am in Jamaica she is not, but we have always wanted to work together musically. The song is something different as I have never collaborated with a female dancehall artiste before. This song is a fun catchy tune and it has the new soca flavor that will have people chipping down the road this season.”

Ce’Cile for her part is excited about the track: “I love this song. It is very different from what fans have been used to hearing from me but it will definitely have them dancing this soca season. Mr Vegas basically said do it this way, and i was happy to just follow his lead as he has a knack for up tempo hit tracks, they always work.”

This is the second soca track from Mr. Vegas this year; his first, Shock Dem, has been doing well in the Caribbean and in soca loving sections of the United States. Mr. Vegas is still on the dancehall scene however, with Give it to Har and Come Here Bubble along with his latest reggae effort Love Yourself all doing well.

Ce’Cile has also been hot on the radio with several dancehall tunes making the rounds such as No Gyal and Regular. On the reggae side she has been promoting Got Me Hooked and Third Finger.