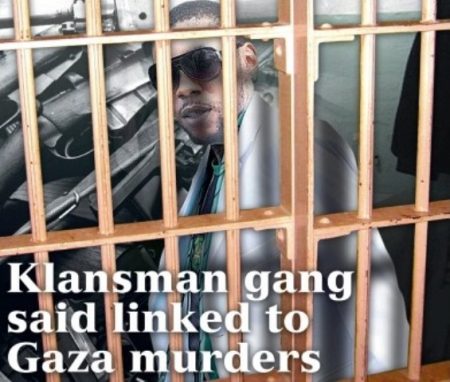 Vybz Kartel told the police the whereabouts of several wanted men in Portmore, St Catherine and provided the authorities with information that led to the recovery of 17 illegal firearms, a highly-placed police source has disclosed.

The move by the embattled entertainer was part of an effort to gain his freedom, or at least a vastly reduced prison sentence, the police said.

The startling revelation came to light during a Jamaica Observer interview with a member of the constabulary’s top brass late last week.

“He wanted to meet with the commissioner who assigned a member of the high command to meet him. During the meeting he offered information on wanted men in Portmore and also coughed up a number of illegal firearms. He was trying to broker a deal to get the charges dropped,” the source said.

Vybz Kartel along with André St John, Shawn ‘Shawn Storm’ Campbell and Kahira Jones were all found guilty and slapped with life sentences for the murder of Clive ‘Lizard’ Williams, who police say was bludgeoned to death at a house in Havendale, St Andrew, on August 16, 2011.

The men will have to serve 35, 30, and 25 years respectively if the Appellate Court throws out their appeals, which will likely be heard in a minimum three years from now, based upon the pace at which such appeals are dealt with.

According to the police source, the artiste made the offer when he realised that the walls were closing in on him, after homicide investigators were sealing up their probe into Williams’ murder.

The police also said that Vybz Kartel and a funeral director also met with a top-ranking cop after a probe was launched into whether or not Williams’ remains were cremated.

The police said evidence was suggesting that Edwards was killed and her body disposed of as she had knowledge of sinister dealings relating to Williams’ body.

“We believe she was killed because she was the weak link and she knew too much, but we are still investigating,” the source said.

Last Wednesday, Police Commissioner Owen Ellington drew the ire of defence attorney Tom Tavares-Finson when he declared that Kartel (real name Adidja Palmer) was the boss of a criminal outfit that was responsible for more than 100 murders.

Tavares-Finson could not be reached for comment on the latest allegation as the Sunday Observer prepared for a press deadline.

The Sunday Observer source went even further and named a well-known gang based in several Spanish Town communities, as the gang that the commissioner was referring to.

“He was very influential in the Klansman gang. That gang used to carry out his killings for him until his Gaza Empire started doing the murders themselves. We have footage of him and a leading Klansman member bragging about the best places to kill people, whether in the church or other places. That Klansman was heard bragging that he shot eight people in a church already,” the source said.

The Sunday Observer has also been informed that the police have in their possession additional footage of the video that was shown in court where men were overheard planning murder.

The footage, the source said, showed a headless body, believed to be that of Williams, lying on the floor.

It was not clear why that was not entered into evidence during the recently concluded trial.

Shawn Campbell, another police source said, may have been a victim of loyalty to the ‘Worl’ Boss’ as he now faces the possibility of serving a 25-year sentence after refusing a deal to plead guilty to accessory before or after the fact and serve a three-year sentence.

The police said that Campbell may not have known that Williams and the prosecution star witness Lamar Chow were earmarked for death when he accompanied them in a taxi driven by a man known only as ‘Need For Speed’, to the ill-fated house.

“We have information that he was under the impression that the men would be beaten for their carelessness in the disappearance of the two guns. When he arrived, we heard he was surprised to see so many strange men, who we believe to be members of the Klansman gang, and that is why him tek weh himself.

“We know that it is only after the voice notes were revealed that he became aware that he, too, could have been harmed over the guns. Maybe he would have acted differently if he had heard some of the things that came out in court,” the source said.

All four convicts are now being housed in a maximum security section of the New Horizon Adult Remand Centre on Spanish Town Road in Kingston where high-risk inmates are kept at the State’s pleasure.