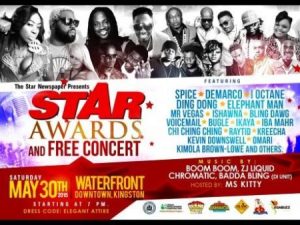 It was a star studded event last Saturday May 30, at the 2015 Star Awards held at the Waterfront, Downtown Kingston. The function was hosted by the fabulous diva Ms Kitty and was graced with the likes of top dancehall, reggae and gospel artistes as well as Kingston’s most prestigious socialites.

The night was definitely one of fashion as attendees strut the red carpet in designer gowns and suits. Among the best dressed females for the evening included, Ms Kitty, Ishawna, Keiva and Spice, which were not outdone by the men who complimented them, such as Voicemail, Warren Weir and gospel artiste Omari.

There were electrifying performances by Spice, I Octane, Sizzla Kalonji, Mr Vegas, Ding Dong Ravers, Chi Ching Ching and Demarco which had the audience fully engaged.

The night could not have ended without the highly anticipated awards segment. Dancehall artiste Spice walked away with a three awards which include Female Deejay of the Year, Performer of the Year and Music Video of the Year for her song ‘So Mi Like It’. The other awardees were;