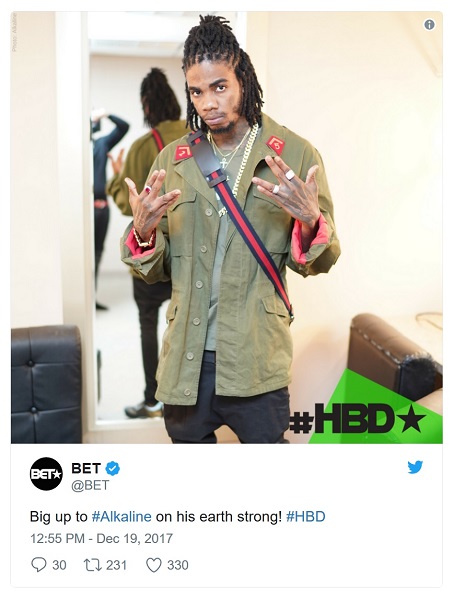 ALKALINE FANS TROLL GAZANATION AFTER BET SHOUT-OUT
Vendetta Boss celebrated his 24th birthday on Tuesday, December 19, 2017. He got alot of birthday wishes from his fans and fellow celebrity peers. The biggest shout came from BET who tweeted out “Big up to #Alkaline on his earth strong! #HBD.

Gazanation didn’t believe that the shout-out was authentic They suggest that is was photoshop. We included the Originbal Tweet above to show its authenticity.

The back and forth between fans of the two dancehall rivals are hilarious, check them out below.

“Vybz kartel can’t even get a shout out from sting, BET and the red carpet #vendetta straight,” one fan wrote while another added, “The Gayza fool them a try say a fake but now them silent when them find out its real. A bunch of badmind individuals just like the cage boss.”

“Lol. I swear Jamaicans people are in denial… when Unu a guh admit a alka a run dancehall now? A did kartel once up on a time but not anymore… n the photo is actually real, cos if y’all took the time to go on Twitter (like I did ) you all would’ve seen the photo.. unu too badmind, man. Acting like kartel is suppose to be the only successful Jamaican dancehall artist,” one Vendetta fan clap back.

Alkaline and Vybz Kartel are two of the leading artists in dancehall this year with dozens of hits between the two of them that only serves to further fuel their rivalry.